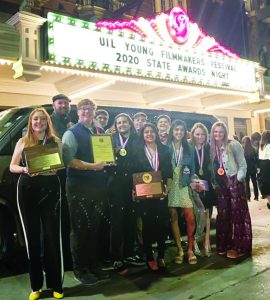 AUSTIN – The Audio/Visual & Technology students at Nocona High School continued their tradition of being among the best in Texas Tuesday as the campus’ two entries in the State Young Filmmakers Awards placed first and third in their respective categories.

In this the seventh year of the University Interscholastic League competition NHS this was the fourth time in the last five years an NHS entry has made the finals.

All participating entries were aired during a special showing of the state finals at the Paramount Theatre in Austin. The NHS teams and their sponsors and supports attended the event.