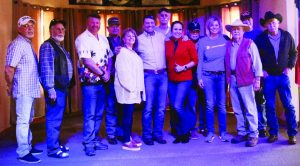 R.Adm Ronnie Jackson, 52, of Levelland brings one thing none of the other 14 Republican nor 3 Democratic candidates for the 13th Congressional District of Texas. Access.

Access to President Donald Trump. Access to former President George W. Bush. Access to many of the current cabinet members of the Trump Administration. Access to the flag officers of the U.S. Navy and U.S. Marine Corps.

Jackson made a campaign stop last Thursday at The V in Nocona where he outlined what stands him ahead of the other 14 Republican, and three Democratic candidates in the race.

For more on this story see this week’s edition of The Nocona News.