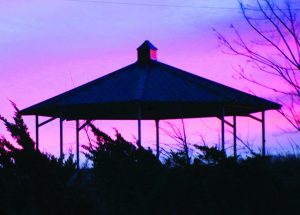 At Tuesday’s meeting the Nocona City Council will consider adopting a resolution accepting the long-term maintenance obligations for a proposed 1 mile walking trail around the crest of Blue Mound centering on a gazebo built by the club several years ago.

The meeting will be held in the council chambers at Nocona City Hall beginning at 5 p.m.

Several years ago the late Cecil Fenoglio donated the historic site to the city with the goal of creating a park setting capped by the gazebo.

The service club raised funds to build the gazebo, but the project stalled until recently when the club formed a 501(c) (3) corporation for the purpose of accepting loans and seeking grants to construct the accompanying parking area and the walking trails.

Other items on Tuesday’s agenda will include a resolution to put several tracts of property up for sale. Title to the properties had been acquired as a result of unpaid back taxes to the city, county and school and hospital districts.