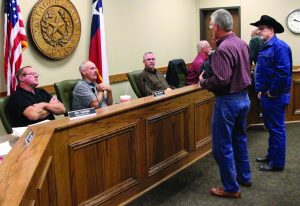 MONTAGUE – While the county commissioners see the need for requiring any wind turbines erected in the county to be setback from adjoining buildings and roads, whether they can legally require such “public safety” measures is another matter. But it is one the court is willing to explore.

Monday morning the bulk of the court’s meeting was spent hearing from five county residents of the asking the court to adopt an ordinance requiring wind turbines to be located at least 2,000-feet or three-times the height of the turbine from any property line, road or structure on adjoining property, as outlined by engineer Ann Smith who lives west of Bowie on Vashti Road.

For the past two years, residents of far southwestern Montague County have been privately, and publicly communicating their opposition to the proposed development of a new wind farm in southeastern Clay and southwester Montague Counties.