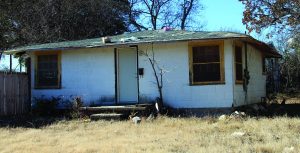 This house at 107 Bowie St, was declared substandard in 2016 and ordered demolished. Tuesday the City Council ordered the 5th owner since that action to complete the task in 30 days or face fines.

The Nocona City Council “drew a line” last Tuesday when it comes to dilapidated domes as it ordered Frederick Goodwin to demolish the home, he purchased less than 30 days early not realizing the structure had already been condemned.

On May 10, 2016, the city council, sitting as the City Building Commission, gave the then owner 90 days to demolish.

“How many times has this sold since 2016?” asked Councilman Donnie Davis, the most verbal member of a council that has been frustrated at the barricades the city faces in remove unsafe structures.