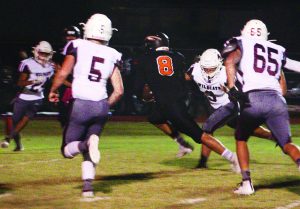 The Nocona Indians did some ‘growing up’ Friday night and in the process responded to a dismal first quarter to scorch the Callisburg Wildcats 33-13.

Two plays into the second quarter, Callisburg was leading 13-0; had 9 first downs to none for Nocona; and had rolled up 164 yards in total offense to a minus 3 for the tribe. They did so by running out a double tight end, wing back, two running back formation to create running gaps in Nocona’s out-numbered line.

Following the game, head coach Rick Weaver praised his team for hanging tough as the coaching staff pointed out they made adjustments on the fly – going with four down linemen on defense instead of three, thus limiting