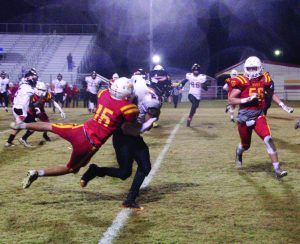 Chandler Fenoglio drags an S&S Ram behind him.

SADLER – It took just two plays for the Nocona Indians to establish the fact that while the weather conditions might demand a slog-it-out ground game, the tribe was determined to attack the S&S Rams through the air.

On the game’s second play, as the Rams rightfully concentrated on senior wide out Jason Sparkman, senior quarterback Carter Horn found senior wide out Ian Hostetter alone in the middle of the field. Sixty-seven yards later the Indians had a 6-0 lead they would never surrender.