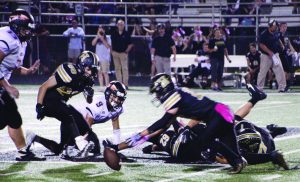 His comments came after the tribe dropped their best chance at the road to the state playoffs losing to the Henrietta Bearcats 33-7.

“You can’t turn the ball over five times (in the first half), and you can’t miss tackles like we did and win,” the Indians first year head coach truthfully told a despondent squad.

Now the Indians face Callisburg, S&S, Holliday and City View to finish the season needing to win three of those four games to have a shot at the play-offs.