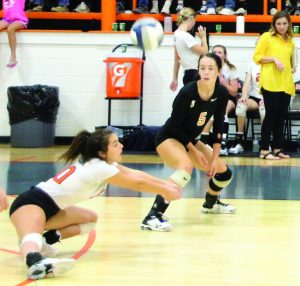 Each team had to press, both offensively and defensively, knowing the other was not going to give points away on silly mistakes.

And while both squads committed far more errors than normal, it was because of that need to press that saw the Cardinals hand Nocona 39 of its 101 total points while Nocona’s errors fed Melissa 46 of its 105 total points.

Melissa took the first set 25-22 as neither squad earned more than one point on serve until Melissa’s libero sophomore Chelsea George stepped to the service line. That rotation proved to be problematic for Nocona throughout the match as she served up a pair of deep aces as the 21-21 lead suddenly went to 21-24.