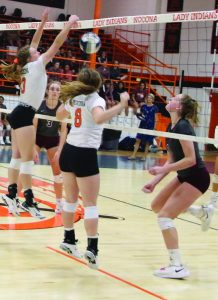 “Again, our serving killed us the first set,” she said as the #15 ranked Lady Indians fell 26-24 in the opening set by committing 8 service errors (to 4 by Bridgeport).

Bridgeport walked into the Nocona Middle Gymnasium with a Division 1 commit in 6-foot-1 Zoe Hall who would hammer down 17 kills, 4 aces and a block. She is an early commit to join the Lady Frogs at TCU.

And she wasn’t the Sissies only offensive option as 6-foot senior Anna Strother knocked down 16 kills and served up 3 aces.