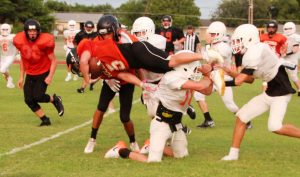 Ian Hostetter leaps into the end zone during Thursday’s scrimmage with Petrolia.

There was a lot to be proud of Thursday night as the Nocona Indians dominated the Petrolia Pirates in the second of two pre-season, controlled scrimmages.

Lightning concerns north and west of Nocona caused an hour delay between the conclusion of the JV scrimmage against Iowa Park, which was dominated by the Indians, and the start of the varsity scrimmage.

Read more about the tribe’s final scrimmage in this week’s edition of The Nocona News.