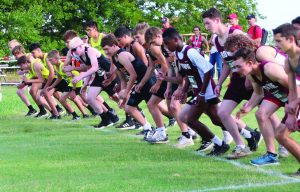 The varsity boys division of the Indian Cross Country meet gets started.

While Nocona swept first in both the varsity and junior varsity boys’ divisions at the Nocona Cross Country Meet Thursday at Indian Oaks Golf Course, the JV crown came down to a head to head matchup between – the fifth-place runners.

Runners from Bowie’s junior varsity may have gone first and second in the men’s 3K, but the Indians had the better team – by a single point.

Bowie’s Nathan Rogers and Kynan Demoss took first and second in the JV boys division running the up and down course in times of 22:03.9 and 22:13.6.

The overall championship would be decided not by the top one or two runners, but instead it would be decided in a head-to-head match between Nocona’s Angel Resendiz and Bowie’s Creed Gallia as Rabbits Iziak Williams and Logan Hutson had come in seventh and eight in times of 24:52.6 and 25:07.9.