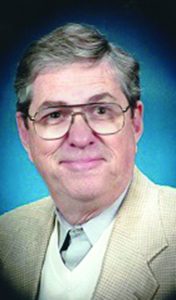 While in law school, Greg met and married Norma Jean Hillyer of Alvin.

Greg moved his small family to Gainesville and began practicing law. Greg was blessed with four sons, Kenneth Sean, Michael Kevin, Patrick Tyler, and Timothy Ryan. After much waiting, and anticipation, Greg was finally blessed with a little girl, Sarah Abigail Cena Dawson Underwood, the apple of his eye, and as he stated later in life, “She would have been the best defense attorney out of all of my children.”

While in Gainesville, Greg also served as County Attorney and later as Cooke County Judge

In the early ’80’s Greg moved his law practice to Bowie.

Happy to be back in his home town, he began to take an interest in his community. He served on the City Council and as Mayor.

In 1989, Greg had a new role of PaPa with the birth of his first grandson and followed with 14 more grandchildren and now 5 great-grandchildren

Then in 1998, Greg threw in his hat, and ran for the Texas State Senate. Although this attempt was not meant to be, he did have the opportunity to try and voice his views, the views of his constituents, and to make a difference for his community, family, and friends.

Over his 55 years as an attorney, Greg offered the greatest of care for his fellowman, generous of his time and money and freely handing out legal advice, he might even ask you why you didn’t take it. He was a pillar of his community.
Any extra time after work, or on the weekends, Greg could be found out at the Country Club Golf Course playing the game that he so dearly.

There will be a visitation held on Monday, July 29, from 10 a.m.. until 12 p.m. at Jerry Woods Funeral Home Chapel in Nocona.

A funeral service will follow the visitation on Monday at 1 p.m.. at First United Methodist Church in Bowie officiated by Steve Martinez under the direction of Jerry Woods Funeral Home.

An interment will follow in Briar Creek Cemetery, Bowie.

In lieu of flowers, donations can be sent in Greg’s name to: Montague County Child Welfare Board, the Tales N Trails Museum Nocona or MD Anderson Cancer Research.