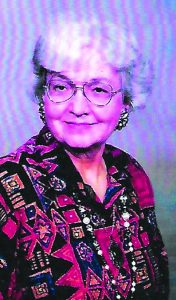 Marilyn Leota Hudnall Gardner, of Advanced Rehabilitation and Healthcare of Bowie, and formerly of Memphis, Mo. started her heavenly journey on Feb. 10, 2020. She was 89.

The daughter of Duffy James (DJ) and Fannie I. (Myers) Hudnall, she was born on July 16, 1930, in Memphis, Mo., a small farming town in the northeast part of that state. She graduated from Memphis High School in 1948 as valedictorian of her class and served as a draft clerk for the Selective Service system during World War II.

Marilyn was baptized into the First Baptist Church as a young woman and was strong in her faith the rest of her life.

Marilyn began college at Northeast Missouri State University in Kirksville, Mo., but left after a year to marry Van Willis Gardner, a local farmer, on Sept. 11, 1949.

The couple had 4 children: including Cindra Gardner (Murphy) of Nocona and Wendell Gardner of Edina, Mo., who survive her.

Her husband died in 1987: a set of twin sons, Alan who died in 1966 and Halan who died in 1985; and a sister, Patricia Ann Pine, died in 1990; and brother, William (Billy), died in 1937. She was also preceded in death by all of her grandparents, including Sarah Ann Hudnall Downing, her great-great-grandmother, (the daughter of William G. Downing who had built, and owned, what is now, the “Downing House Museum” in Memphis, MO.) Besides her daughter and son, she is survived by a niece, Amy Pine, and a great-niece, Zoe Mae Ross, both of Durham, N.C.

A visitation in her memory will be held Friday, Feb. 28,from 6 to 7 p.m. in Christ Community Church in Nocona. Another visitation will be held in her home town, Memphis, Mo., at a later date.

The family has asked that in lieu of flowers, contributions be made to Christ Community Church, Alzheimer’s Association, or the charity of the donor’s choice.