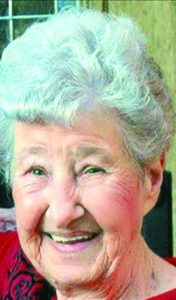 Dorothy attended school in Nocona and graduated in 1947. She was baptized into the First Baptist Church in May 1947.

She worked for Paul and Lela’s Cafe until 1955 then went to work at the Nocona Athletic Goods where she worked until she married Tommy Atkins Oct. 31, 1957. They moved to Skellytown, then to White Deer, and finally settled back in Nocona in 1967. Dorothy returned to work at Nocona Athletic Goods in 1968 and remained there until she retired in 1980.

After Tommy’s passing in 2012, she moved to Boerne where she lived for four years to be close to her daughter Marcia and family. From 2016 until her passing, she lived in Corinth and then Highland Village, Texas to be closer to her sons Bill and Randy and their families.

Dorothy was a lifetime member of American Legion Auxiliary and an Eastern Star.

She was small town country girl that grew up enjoying square dancing (sometimes on roller skates), the two-step, going to rodeos, and even driving cars in dirt track derbies.

She mastered the art of country cooking. She also loved to grow vegetables in her garden and always had a plentiful supply of peaches, pears, plum, and pecans. She prepared some of the best desserts ever. Dorothy loved playing cards, dominoes, and games as well as Friday night Bingo with family and friends. She always played to win. When playing Phase Ten she will hold out then go out to set everybody in the hand.  She and Tommy played games with each other almost every day.

She cherished her family and spent as much time as possible with her children, grandchildren, and great-grandchildren.

She is survived by her sons William Mitchell and wife Ann of Highland Village, Randy Atkins and wife Jennifer of Pittsburg, daughter Marcia Neal and husband Buddy of Boerne, and daugher-in-law Felicita Gamboa Atkins of Bogota, Columbia (wife of son, Thomas). She is also survived by her younger brother William Reynolds and wife Clara of Santa Maria, Califo., as well as 14 grandchildren and 16 great-grandchildren and many beloved nieces and nephews. Her legacy lives on.

Funeral services will held at Scott-Morris Funeral Home Chapel in Nocona on Saturday, Jan. 11, 2020, at 2 p.m. with interment to follow at Nocona Cemetery. Visitation is scheduled that morning from 10 to 12:00 p.m.