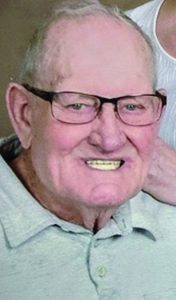 Jimmie Douglas James was born in Lamar, Colo., July 26, 1934, and grew up in the Keyes, Boise City Oklahoma area.  He served in the Army in Germany at the same base with Elvis Presley.

In 1956, he married Dematra Knight in Lawton, Okla. Jimmie worked for Bowie Industries in the 1960’s in sales. He would later work in the oilfield, and car sales before moving to Mount Sterling lll., where he worked for the prison system.

In 1986, he married Ruth Reische in Henrietta, Texas, and later lived for 20 plus years in Illinois before moving back to Nocona. He was a resident of Cherry Street Village where he had many friends.

The son of Hugh and Lois James, he is survived by daughters Sandra Storey and husband Rob of Nocona and Sherry Wilson of Gainesville. Survivors include sisters Corine Wiley and Mary Ellen Walters of Keyes Okla., 8 grandchildren, 16 great grandchildren and many nieces and nephews and a very special friend, Cindy Billings.

He was preceded in death by son Stephen James and wife Ruth.

Services will be held at Saint Joseph’s Catholic Church in Nocona on Thursday, Dec. 12 at 10 a.m., with burial to follow at Elmwood Cemetery in Bowie under direction of Jerry Woods Funeral Home.

Memorial Donations may be made to Tails ’N’ Trails Museum in Nocona.