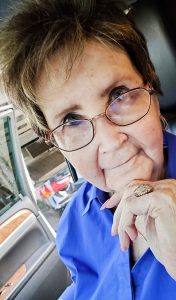 Fay Spangler, 74 of Nocona, passed away peacefully at home surrounded by her family on Friday, Dec. 6, 2019.

Funeral service will be at 10:00 a.m. on Wednesday, Dec. 11, in the Chapel of the White Family Funeral Home in Bowie.

Burial will follow at the Nocona Cemetery in Nocona.

Family will receive friends from 6 to 8 p.m. on Tuesday, Dec. 10, at the White Family Funeral Home in Bowie.

As a young girl she faced challenging conditions at home, and was raised in poverty in a dilapidated home. Despite her upbringing Fay became the first of her generation to receive a college education.

Fay attended Cooke County College (now NCTC) graduating with a nursing diploma. She went on to have a life-long career in nursing, and retired as a Director of Nursing from Ashton Medical Lodge in Midland.

Fay dedicated her life to giving back, she sacrificed herself to her family, as well as the needy and all those around her. She will be remembered with love an appreciation as a devoted mother, grandmother and friend.

She is preceded in death by her parents, brother Clois Vickers, sisters Ruby Nichols, and Margie Perkins, twin grandsons Zachary and Brandon Taylor