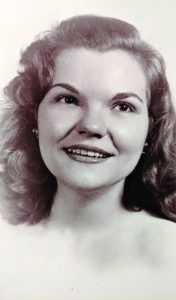 Funeral Service was held at 10 a.m. Friday, Oct. 11, in the Chapel of the White Family Funeral Home.

The family received friends from 6 until 8 p.m. Thursday. Oct. 10, at the White Family Funeral Home.

She graduated from Dayton High School and attended Idaho State College where she was a member of Alpha Omicrron PI and Pi Kappa Delta. Jannie worked as a flight attendant for United Airlines for a couple of years.

She married William Thomas Newman who passed away shortly after their son David was born.

Jannie was a devoted mother who raised her son David as a single mother and worked as a travel agent in Houston and lived for many years in Sharpstown, southwest Houston.

Later she married Harroll T. Parr in 1988, and they moved to Nocona and started ranching on his family’s ranch.

She is preceded in death by her two husbands W.T. Newman and H.T. Parr