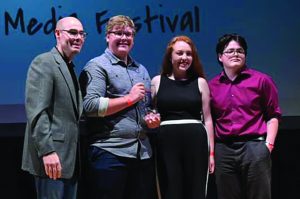 Congratulations are in order to the Nocona High School filmmakers!! Their animation “Zooport Group” earned the first place trophy for Texas Animation at the BAM film festival in Clute.

This is an international competition with over 1600 entries from around the world. “Zooport Group” was judged by professors and industry professionals from New York, Texas and New Zealand.

The awards were presented by Texas Speaker of the house Dennis Bonnen. Rep. Bonnen is a big supporter of education and the arts.

The “Zooport” team consisted of close to 20 students. Hannah Dyer, Corbin Paterson and Brennen were able to attend the festival along with sponsors Rob Norman, Todd Peterson and Stacey Dyer. In addition to the film screening and awards the delegation attended several workshops dealing with different aspects of filmmaking.

“Thanks to our administration, especially Mrs. Wright for allowing us to attend this event,” said Norman.