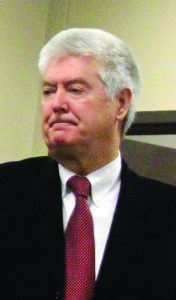 District Judge Jack McGaughey has announced he will be a candidate for re-election to the post of District Judge for the 97th Judicial District comprised of Archer, Clay and Montague Counties.

“It has been a great honor for me to serve as district judge for seven years, and I appreciate the encouragement I have received to run for another term,” McGaughey said.

McGaughey has served as District Judge since being elected in 2012. Prior to that he served as the elected District Attorney for the 97th Judicial District for 16 years.