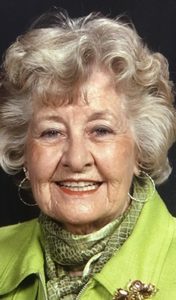 Verna Ruth O’Neal, 93, died on Sept. 15, 2019, in Nocona at Cherry Street Village where she received excellent care for the last seven years.

Verna enjoyed entertaining people, especially the annual Christmas and 4th of July parties and traveling with friends and family.

She worked at the People’s National Bank for many years and as an RN for Nocona General Hospital.

She and her husband, Lindell, owned several businesses including Horizon Manor Nursing Home in Nocona and O’Neal Oil Co.

Lindell and Verna Ruth were founding directors of the North Texas Society of History and Culture, which operates the Tales ‘N’ Trails Museum, and she succeeded him on the board serving until after the museum was opened in 2010.

The visitation will be held on Friday, Sept. 20, at 1 p.m. at the First United Methodist Church in Nocona followed immediately by the service at 2 p.m. officiated by Minister, Ron Wilson and her son, Gary O’Neal.

Pallbearers will be her grandsons and great-grandsons.

Memorials may be made to the Alzheimer’s Association.