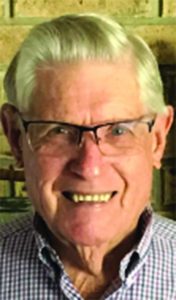 Funeral services will be held at 2 p.m. on Thursday, Sept. 12, at the Forestburg United Methodist Church with Rev. Veronica Greanead and Rev. Jon Kendzie officiating.

Burial will follow at Dye Mound Cemetery near Saint Jo,

Family ere tol receive friends from 6 to 8 p.m. on Wednesday, Sept. 11, at the White Family Funeral Home in Bowie.

Charles was born Sept. 23, 1933, to Belle (Young) and Luther Edwards at Burkburnett. His mother Belle succumbed to pneumonia when Charles was 18 months old. His aunt and uncle, Mae and Lonnie Young, took Charles and raised him as one of their own children.

Charles attended school at Dye Mound for five years and graduated from Saint Jo High School in 1951. He attended Midwestern State University and graduated in 1955 with a degree in Animal Husbandry and minor in Agronomy.

Released to the Naval Reserve in 1957, he attended Texas Tech University and obtained an agricultural education teaching certificate in the spring of 1958. He was employed by the Forestburg Independent School District as Vocational Agriculture Teacher in August,1958.

He married Gayle Embry on July 7, 1961, and settled in Forestburg raising their three children, Pam, Veronica, and Douglas.

He retired from teaching in 1990 after three decades of developing students for leadership and service through his involvement with Future Farmers of America and related student judging teams and other student leadership activities. He was a life member of the Texas Retired Teachers Association, an Honorary Life member of the Vocational Agriculture Teachers Association of Texas and a member of the Montague County Retired School Personnel where he served as local president and served as board member and president of the MCRSP Scholarship Corporation.

In addition to teaching, over the years Charles has operated a 60-sow farrow-to-finish swine operation; maintained a beef cattle herd of up to 28 head, planted and maintained a 600-tree peach orchard, and owned and managed a coin-operated laundry in Forestburg.

Other community service activities include Forestburg Riding Club treasurer for 33 years, Montague County Farm Bureau director for 17 years, President of the Dye Mound Community Association for 34 years, board member of the Dye Mound Cemetery, operator and president of the Forestburg Water Supply Corporation for over 20 years and organizing and directing the Forestburg Watermelon Festival parade for 20 years concluding with being selected as Grand Marshall in 2008.

Should friends desire memorials can be made in honor of Charles to the Forestburg United Methodist Church at P.O. Box 374, Forestburg, Texas 76239 or to the Montague County Retired School Personnel c/o Larry Palmer at P.O. Box 223, Bowie, Texas 76230.