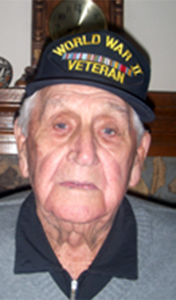 Cooper was born in Spanish Fort at the home of his maternal grandparents, Mr. and Mrs. Ollie Cooper. At 10 days of age, he and his mother joined his father, Jim, in Saint Jo where he lived essentially the rest of his life.

After graduation from Saint Jo High School in 1943, he went to Fort Worth where he went to a sheet metal school and worked for Consolidated Air Craft until his draft into the Navy during WWII. He served aboard the USS Columbia as main throttle man serving all over the South Pacific in active duty.

At the close of the war he returned to Saint Jo and attended North Texas State Teachers College for two years. He came home to help his mother take care of his dad who had had a stroke. He secured employment with Jim Lauderdale who was the Sinclair Marketer here and continued with that job until he purchased the agency in the early 60’s. He sold the agency about 1968 and worked several years at Nocona Boot Company. His last employment was with Enderby Propane from which he retired in 1993.

Cooper was active in community service serving on the Saint Jo School Board and at two separate times on the Saint Jo City Council. He had also served on the Board of The Saint Jo Civic Center from the early 2000’s until a couple of years ago. He was an early day member of the Saint Jo Volunteer Fire Department when that consisted of one fire truck and one bobtail truck in which they hauled water. He attended the Methodist Church for more than 40 years until 1995.

Cooper was an avid golfer and has been followed in that pastime by his son and his grandson, Alex. In his retirement he was a regular at the 2 o’clock Dairy Queen Coffee Club.

His pride was his children and his grandchildren.

Cooper is preceded in death by his parents: James and Mildred Price; and brothers: Moore Price and Donald Price.