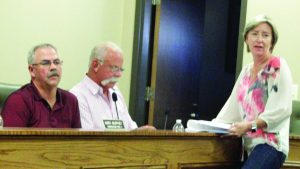 MONTGAUE – For the second meeting in a row, an elected county official missed the commissioner’s court meeting Monday only to learn the court had changed the salary structure in their office.

Two weeks ago, it was Sheriff Marshal Thomas who missed the meeting, he was on vacation with his family, when the court had to back up on a pay raise for Thomas’ deputies they had approved at a prior meeting.

Monday it was County Attorney Clay Riddle who was absent only to later learn the court stripped a “victim’s coordinator” stipend from his chief deputy/administrative assistant.

Read more about new changes to some county salaries in this week’s edition of The Nocona News.