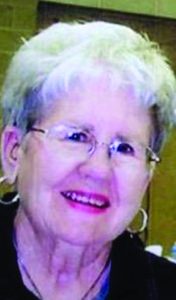 She married the love of her life John Ed Hinton Jr. one day before she graduated from Prairie Valley High School in May of 1953.

She worked for the Nocona Telephone Co. until she moved with her husband to San Marcos. There she was a secretary on the Air Force Base until they were transferred to Sheppard Air Force Base in Wichita Falls in 1956 while there John finished his tour of duty in 1957.

During that time they moved back to the Hinton Ranch where Carol started to work again at the Nocona Telephone Co.

Carol went to work at the U.S. Post Office as a rural mail carrier and retired from there in October of 1999.

After retirement she and her husband traveled to 48 states, spent summers in Colorado and enjoyed life in general. She loved western swing music and made numerous friends through western swing and square dancing.  Most of all she loved her family.

She was a wonderful wife, sister, aunt & great-aunt. Survivors include sister, Barbara Kelly and husband J.C.; special nephew Ray Sappington and wife Amy and their daughters, Erika & Marlowe all of Valley View; brother, W.R. Tucker and wife Patti of Nocona; niece Cheryl McDonald and her son Tucker of Little Elm; nephew Jeff Tucker and wife LeAnn and their daughter Eleanor and sons Nicholas and Garrett of Denton; and Scooter her constant & devoted companion.

There will be a visitation on Monday, Aug. 12, from 6 – 7 p.m. at Jerry Woods Funeral Home Chapel in Nocona.

A special thank you goes to the wonderful management & employees of Wesley House in Gainesville & Trio Hospice.  Professional & caring people.