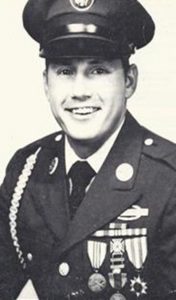 Richard Lee Blair passed from this life on Sunday, June 16, 2019 in Decatur. Mr. Blair was born on March 21, 1943 in Houston to Charlie Clarence “Bois D’Arc” and Mary Alice (Ritchey) Blair.

Mr. Blair is preceded in death by his parents, his loving wife Liz Blair, as well as two sisters and a brother.

Richard is survived by his son Lee Blair, his sisters Susan Handcourt and Audrey Pace as well as 10 grandchildren and 8 great-grandchildren.

Richard was a 1963 graduate of Nocona High School.

Mr. Blair worked in the oilfield industry for a while, then worked for Nocona Boot Factory for 18 years as well as Nocona ISD as a janitor where he retired.

Mr. Blair was a member of many VA organizations as he served in the Army in Vietnam as a tunnel rat. Mr. Blair was an assistant scout master for the troop in Nocona.

While station in Vietnam, Richard volunteered to work as a “tunnel rat” working in the Hobo Woods and Iron Triangle.

In the “Story of Montague County Its Past and Present,” Richard recounted, “When I went underground, I would tie a rope around me. I had a flashlight, a .45 pistol and a piece of pipe that I used when I came to the end of the tunnel.”

Graveside services will be held on Friday, June 21, 2019, at 5 p.m. at Oak Hill Cemetery.  Scott-Morris Funeral Home has been entrusted with arrangements.