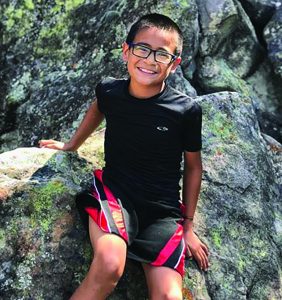 A 12-year-old Nocona Middle School boy, Freddie Duran, had his lower left arm amputated Thursday evening in what an accident involving a horse and a rope.

(Editor’s Note: Some of Freddie’s teachers have established a PayPal donation page to help the family of nine with medical and living expenses. To donate go to the Nocona News Facebook page and click on Freddie’s picture. It will take you to PayPal.)

NMS Principal Amy Murphy said the exact details on how the catastrophic amputation occurred, “It actually happened after the last of school. That evening. His siblings saw him playing chasing a horse on is bike,” she said Tuesday morning.

“They later found him,” she said. “No one was really sure how it happened, and of course Freddie wasn’t able to explain.”

The just graduated sixth grader was taken to Nocona General Hospital where he was stabilized and then flown to Cook’s Children’s Hospital in Dallas.

His list of injuries was extensive: amputation of the left forearm, broken lower left leg, possible broken foot and ankle as well as jaw and ribs.

“Some of his sixth grade teachers are putting together a fund page,” the principal said adding one of his teachers “was reaching out to his older sister to see exactly what the family needs and how they need it.”

Freddie has lived with his aunt and uncle since he was 3-years-old, the administrator said.

The youth underwent several surgeries to address his injuries and may be facing more.

“He will, of course, be fitted with a prosthetic arm,” the principal said.

“As most of y’all know, my little brother Freddie has been going through a rough, unbelievable accident,” said Patricia Espinoza in a Facebook post late Tuesday morning.

“He’s been going through multiple surgeries, and he’s almost ready to come home. It’s been really hard accepting what has happened,” she commented.

“He has no health insurance, and my family is needing help. We don’t ask for much anything is always better than nothing,” she commented.

Family friends have set up a fundraiser raffle. Details can be found in Patricia Espinoza’s Facebook page.