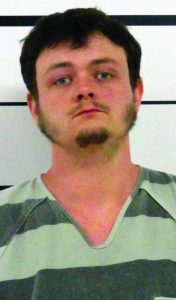 “We’re still trying to piece it together,” Chief Deputy Sheriff Jack Lawson said Wednesday afternoon about an altercation in Nocona Halls Tuesday evening that sent five people to the hospital, two of which then went to jail.

“There were so many different witnesses who saw, felt, or heard something,” Chief Lawson said then summarizing the situation succinctly, “The pieces of the puzzle you need to know is somebody got shot in the face, and somebody got hit with a golf club and somebody got stabbed.”

“Looks like one set of parties – Brenon and Destyne Partney and Haley York — were upset with Chris Morland for the way he drives around the neighborhood when there’s children around,” Chief Lawson said.

“So, they go to confront him about his driving habits, and evidently a fight ensued and Morland ended up getting hit with a golf club until it broke.

“So, they used the end that broke to stab him with – that was Destiny that allegedly did that,” he said trying to paint of picture of who did what.

“He (Morland) had a gun, a shotgun, and allegedly fired it, but we can’t find where he shot it anywhere.

“When he did that Brenon Partney comes out with a .22 and some witnesses said they were shooting at each other. Partney shot Morland in the face,” the chief deputy related.

All four participants then went to the gate at Nocona Hills as an ambulance was summoned from Nocona General Hospital and law enforcement attempted to get to the scene.

Upon arrival, the lead paramedic radioed asking that a second NGH ambulance be dispatched to the scene stating that two stabbing victims would not go in the same ambulance.

According to Nocona General CEO Lance Meekins, the hospital’s two ambulances transported two stabbing victims while a gunshot victim was transported to the hospital by private vehicle and subsequently taken to John Peter-Smith Hospital in Fort Worth by Careflight.

Under federal patient confidentiality laws, Meekins can not release the patients’ medical conditions nor their names, other than noting that the two stabbing victims were treated and released.

Lawson confirmed Morland had been shot in the face and was taken to NGH by private vehicle before being flown to Fort Worth.

“There was another party, Nicholas Walters, he was in the fight too. He suffered, they thought it was a broken leg, but I guess it pulled his hip out of place,” Chief Lawson detailed.

Walters was taken NGH as well as Ms. York.

Initially it was thought that both Morland and Ms. York had been stabbed, or shot, but at least in her case that is now being questioned.

“She had a wound on her stomach area. They didn’t know what it was. At first it looked like a bullet hole, but they scanned it and there wasn’t a bullet inside her,” he said, unable to state exactly what caused her injury.

“Morland, he’s in the hospital. There will be charges pending when he comes out,” he forecast.

“Destiny got hit in the face pretty hard, and she said she was pretty well out of it and didn’t recall much of what happened after that,” Lawson related.

As for the golf club, Lawson said investigating officers noted it was a four iron.

Upon being released from the hospital, Chief Lawson arrested Brenon Lestat Partney, 23, of Nocona charging him with aggravated assault with a deadly weapon, a second-degree felony.

Justice of the Peace Pct. 1 David Allen arraigned the Partneys Wednesday morning setting their bonds at $10,000 each.