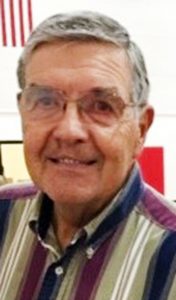 Family will be receiving friends from 11 a.m. to 3 p.m. on Monday, May 11, at the White Family Funeral Home in Bowie.

A graveside service celebrating his life, will be held at 11 a.m. on Tuesday, May 12, at the Montague Cemetery, with Pastor Charles Nichols officiating.

David was born Feb. 7, 1943, to Walter and Frances Brewer. He graduated from Forestburg High School. David received his bachelor’s degree from Midwestern State University in Wichita Falls where he played basketball all four years and was a member of the 1965 national finals tournament team. He earned his master’s and doctorate of education from North Texas State University.

In the short 77 years he was on this earth, he impacted the lives of many people. David was a positive role model as a math teacher, basketball and football coach, middle mchool principal and superintendent for over 45 years.

He was a founding member of the Forestburg ISD Education Foundation and an active member of the Montague County Retired School Personnel.

David loved his family beyond measure. He was married for 56 years to his high school sweetheart Wanda ‘Jody’ Johnson Brewer. Two daughters and five grandchildren later, there are too many memories of farming, fishing, laughing and holidays to mention. While love of his family and friends was paramount, more important was his love of God. For David, the Bible was not just a good book, it was the manual by which to live his life and lead his family. This was evident in the way he loved and served God as a music director, Sunday school teacher, deacon, mentor and confidant.

David was preceded in death by his mother, father and brother, Paul Brewer.

David will be sorely missed by his family and all who knew him. This is not ‘goodbye’; it is ‘we will see you soon’.

For those who wish to make donations in David’s memory, they may be made to the Forestburg Education Foundation, P.O. Box 415, Forestburg, Texas 76239. Or the Montague County Retired School Personnel Scholarship Fund P.O. Box 223, Bowie, Texas 76230.