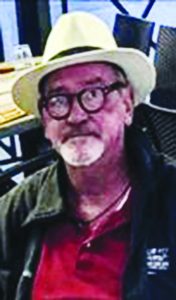 Mr. Williams also served his country in the Army.

Jay spent his career working in the medical field, both in radiology and selling medical equipment. He was member of numerous ultrasound societies.

Jay also loved his Texas Rangers. He had a reserved parking spot every year, and the parking lot attendants knew him by name. He even went to spring training in Arizona several years, where he enjoyed the ability to be closer to the game and the players.

Jay was a Boy Scout, and when he wasn’t watching the Rangers, Jay enjoyed being outside. He loved hunting, fishing, boating, camping, and riding his Harley as well as enjoying a good beer or wine.

Jay is preceded in death by his parents.

He is survived by his wife Sue Williams, daughter Amanda Williams of Burleson, son Kevin Williams and wife Shalane of Denton, son Patrick Williams of Gainesville, daughter Jaime Williams of Carrollton, and daughter Marylou Williams of Austin. His legacy will live on in his three grandchildren Kiersten, Mollie, and Patrick “P.J.” Williams. He is also survived by his sister “Tinker” Ellison and her husband Gary.

Funeral services for Mr. Williams were held Saturday, Feb. 29, at 2 p.m. at First United Methodist Church Nocona with Pastor Donny Haywood officiating and under the direction of Scott-Morris Funeral Home.

Memorials may be made to the DCCCD Foundation for the North Texas Ultrasound Society Scholarship in Jay’s memory.

The website to donate is www.foundation.dcccd.edu/­donatenow or checks may be mailed to DCCCD Foundation, 1601 S Lamar St, Dallas, TX 75215.