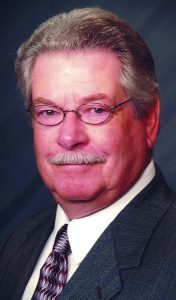 Funeral services were to be at 2 p.m. on Wednesday, March 4, at Central Baptist Church in Bowie with Pastor Gregg Shaw officiating.

Burial was to follow at Bellevue Cemetery in Bellevue.

Family received friends from 6 to 8 p.m. on Tuesday, March 3, at Central Baptist Church in Bowie.

Bobby was born July 8, 1934, in Bellevue, to Ewell and Joy (Miller) Taylor. He attended Arlington State College after graduating from high school. Bobby took off one summer, after his second year and was drafted into the United States Army. He was in the R.O.T.C. and intended to go back to school.

After his basic training, Bobby was tested and selected for the missile program at White Sands. He was in the 11th class to go through. He tested missiles on the Nike Ajax program, and he lived near the atomic test site. During this time Bobby and his buddies would swim in what was later called “The Atomic Tank”. He had the opportunity to meet Werner Von Braun and many generals. Bobby lived to be 85, and all his buddies are gone, mostly due to cancer.

After White Sands he was sent to Surface to Air Missiles, as known as a S.A.M., site in Pennsylvania. Bobby watched a radar screen covering a large portion of the East Coast, patrolling for enemy aircraft. If a plane showed up on radar and failed or refused to identify, there were rules to follow, firing on that plane. Many times, American planes waited almost too long; also if the word had come from the military commanders, he and the other S.A.M. soldiers were responsible to push the final button to fire. Thankfully, it never happened.

The military wanted him to stay and offered a promotion, but Bobby wanted to come back to Texas. His military service was the highlight of his life; and he visited White Sands on occasion.

On July 14, 1956, Bobby married Mary Sue Horton at the First Baptist Church in Bellevue. Bobby owned and operated Bowie Butane Gas Company for many years, with his partner Warren Reynolds.

He is preceded in death by his parents and grandson Brenn Taylor.