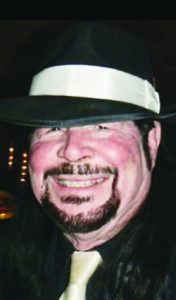 William Thomas (Bill) Hogan, 73 left his earthly body on March 1, 2020, in Plano after a lengthy illness.

The family received friends between 6 and 8 p.m. on Tuesday, March 3, at Owens and Brumley Funeral Home in Wichita Falls.

Funeral services were held at 2 p.m. on Wednesday, March 4, at the Funeral Home Chapel. Private family burial will be on Thursday, March 5, at Hardy Cemetery under the direction of Owens and Brumley Funeral Home of Wichita Falls.

Bill was born on May 5, 1946, the son of the late Jack B. and Tommie Mitchell Hogan in Muenster.

He attended school in Saint Jo and served in the National Guard. Bill’s greatest treasure was his passion for music. He played guitars and the saxophone in numerous bands throughout his life, and his music will be missed by many.

Along with his parents, Bill was preceded in death by a daughter, Tammy Diane Lawrence; a son, John Christopher Hogan; a sister, Jacquline Goldsmith and husband, James; a brother, Michael J. Hogan and wife, Carolyn.