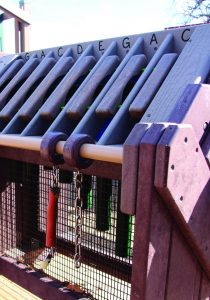 Vandals detached the mallets on the music station at the Chief Peta Playground.

Vandals have taken a whack at the Chief Peta Playground stealing the mallets for the music station, ripping the door off the free book box and breaking at least one of the fence stays which had been engraved in honor of individuals.

“It absolutely breaks my heart to see it being intentionally destroyed,” commented Sarah Zachry who was co-chairman of the Nocona Playground Project than funded and built the Chief Peta Playground.

“I always knew it was a risk and that we’d have to deal with some level of destruction, but the amount of work that someone must have put in to breaking those mallets is pretty significant.  Bent steel, broken mallets…  it’s so very disappointing,” she bemoaned.

To read more about this story see this week’s edition of The Nocona News.