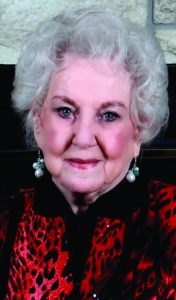 Ruth had a spark for life. She was an avid bowler in her younger years and loved to travel as well as going dancing.

Ruth was a homemaker until age 30 she became a realtor.  She was the top realtor in Ector County for many years.

Along with her husbands she was preceded in death by her parents, and sons, Rannell Eugene Brown in 2003 and Noel Maurice Brown in 1991.

A funeral service will be held later that day at 2 p.m. also at Jerry Woods Chapel with Pastor Joe Caballaro officiating.

Honorary Pallbearers will be Dwayne Grant, Trevor Prior and David Hill.

Memorial donations may be made to Hospice of Wichita Falls, any cancer research, or the Montague County Cowboy Church.