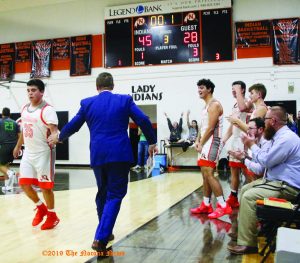 Indian coach Colby Schneiderjan slaps Blake Gauina’s hand after he connected on his fourth 3-pointer in the third period Friday.

Try as they might early in the third quarter Friday night the Nocona Indians could not shake the Paradise Panthersas the Indians’ lead kept fluctuating between 6 and 9 points.

The tribe followed senior Jason Sparkman into a 16-6 first period advantage as the quick post/forward hit from mid-range. Meanwhile Carter Horn and Blake Gauna nailed treys from the outside as between them they accounted for 12 of Nocona’s first period points.