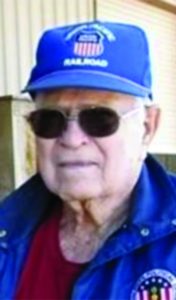 Jane, as she was known to friends and family, was born on Dec. 23, 1927, in Trenton to E.L. and Maye Wilson. The sixth of eight children, Jane was preceded in death by all of her beloved brothers and sisters, Aubrey, Ellie, MayGene, Lloyd, Dot, Hoyt, and Bev. One of the great joys of her life was spending time with her fun-loving siblings, who called her “Teedley.”
When Jane was attending North Texas University in Denton, she met and fell in love with James Ernest Curlin, whom she married on June 18, 1947.

Jane and Jim had four children, Sherry, Cindy, Jay, and John. They raised their family in Jim’s hometown of Nocona where Jane made many life-long friends. They were married for 22 years before Jim’s death in 1969.
Jane was married to Don Campbell (Campy) for 22 years, and Don’s daughter, Carol, became another loved daughter.
Jane was an adventurer and people person. She loved traveling and spending time with her friends, even to the point of guiding groups on trips. She was also an avid dancer, bridge player, and the gracious matriarch of her large family. Her positive and joyous outlook and determination will be sorely missed.
She is preceded in death by her parents, siblings, husbands, Jim Curlin, Don Campbell, Earl Sargent, and Sam Oliphant, and daughter, Sherry Curlin Barker.
She is survived by her children: Cindy Curlin Staley and Joseph A. Staley, James Ernest (Jay) Curlin, Jr., and Donna Mathis Curlin, John Wilson Curlin and Sheila Pieratt Curlin, Carol Campbell and Claire Bow; grandchildren: Bret Barker, Clint and Renee Staley, Sherry and Ryan Carroll, Lindsey and Jim Enderby, Chris and Elizabeth Curlin, and Alex Curlin; great-grandchildren: Maren and Drake Staley, Coan and Oliver Carroll, Holland, Eli, and Vera Enderby, and Sadie Jane Curlin, as well as a niece, four nephews and their families.
Visitation with the family will be at 1 p.m. at First United Methodist Church in Nocona on Saturday, Nov. 16 with funeral to follow at 2 p.m. Burial will be at the Nocona Cemetery.